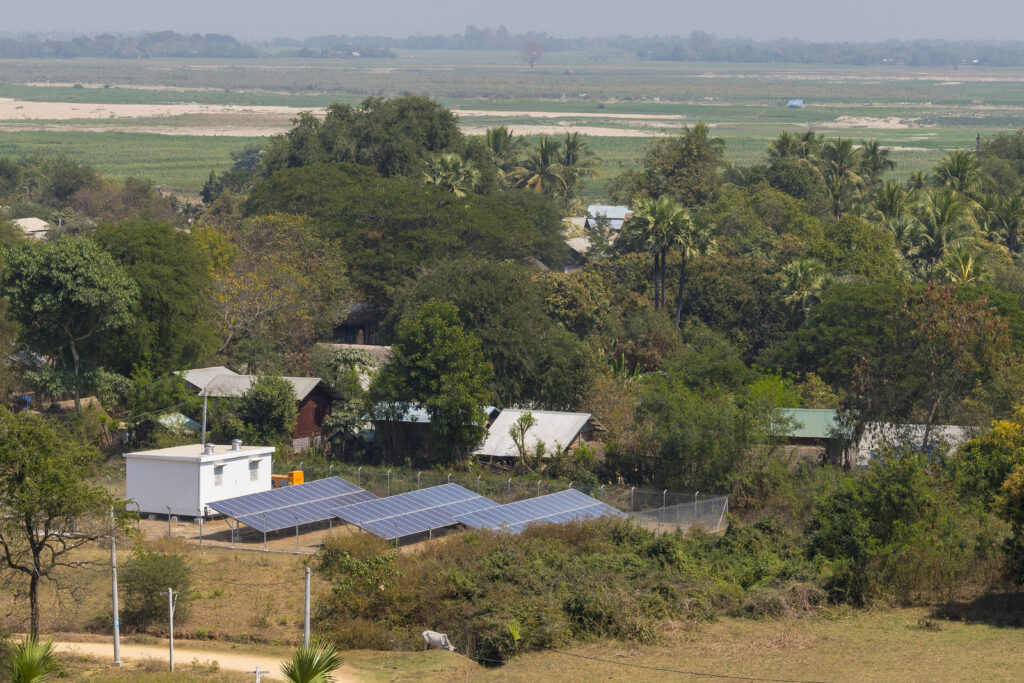 Yoma Micro Power has set up its 250th solar-hybrid power plant in rural Myanmar, with the innovative renewable energy plants expected to deliver power for the first time to an estimated 25,000 people across the country, according to a press release.

Under a unique business model, Yoma Micro Power uses the solar-hybrid plants to generate and distribute affordable, reliable and clean energy to telecom towers, as well as deliver much needed energy to people not connected to the grid.  After a successful pilot project that built 10 power plants in 2017-2018, Yoma Micro Power started the rollout to build 250 power plants in March last year. The success of this rollout demonstrates the scalability of Yoma Micro Power’s business model and the ability of such a business model to bring much needed Foreign Direct Investment (“FDI”) into the country to augment its electricity generation and distribution infrastructure.

Last month, Yoma Micro Power also closed an additional US$40 million from its shareholders to fund growth in the off-grid sector as well as expand its business into grid connected solar systems. The company started piloting a number of small roof-top grid connected solar systems in 2018. Due to the grid electricity tariff increase brought into effect by the Myanmar Ministry of Electricity and Energy last year, solar has become an economically and environmentally attractive source of electricity for large commercial and industrial customers in the country who also have to rely on diesel generators due to frequent power cuts from the national grid.

“Building 250 solar-hybrid power plants in a year is a remarkable achievement and one which puts Yoma Micro Power at the forefront globally in terms of delivering and distributing electricity in off-grid areas,” said Alakesh Chetia, CEO, Yoma Micro Power. “Besides continuing our expansion in the off-grid sector we hope to replicate the success in the grid connected roof-top segment as well, to demonstrate the immense potential decentralized solar power plants and mini-grids have to bring electricity to millions of Myanmar citizens, who are not connected to the electricity grid, while at the same time increasing the electricity generation capacity of the country and offsetting thousands of tons of CO2 emissions.”

Spread across an area of 175,000 square kilometres in Sagaing and Magway Regions, Mandalay Division and Naypytaw Union Territory, the solar-hybrid plants are powering 250 off-grid telecom towers, which had previously relied on diesel power. It’s estimated the 250 hybrid-power plants will offset more than 5,000 tons of greenhouse gas emissions annually, which is equivalent to planting 75,000 trees. The 25,000 people, living in about 25 villages, expected to benefit from the solar-hybrid systems near the telecom towers previously had no choice but to rely on diesel, liquid fuels including kerosene, and candles for their lighting needs.

“With about 60 percent of Myanmar’s people having no access to the grid, the lack of a reliable supply of electricity is one of the biggest bottlenecks for economic development in the country,” said Melvyn Pun, CEO, Yoma Strategic.  “However, it’s clear there are also immense opportunities with Yoma Micro Power quickly rolling out these solar-hybrid plants, showcasing its ability to play a prominent role in bridging Myanmar’s rural electrification gap and to spur sustainable and inclusive economic growth.”

With Yoma Micro Power’s pioneering business model in Myanmar, mobile network operators and tower companies are the anchor clients, buying the electricity generated by the hybrid systems at a cost lower than diesel. The connection is then extended to nearby communities, including households, schools, shops and businesses, through mini-grid distribution networks. The model is designed to be commercially viable. Rural households can pay for the electricity service using cash or Wave Money, Myanmar’s leading mobile financial technology provider, bringing electrical and financial inclusion together in rural Myanmar.

A ceremony to mark the completion of Yoma Micro Power’s 250th power plant and the inauguration of an expanded mini-grid serving Thit Seint Gyi village in Wetlett township, Sagaing Division was attended by the Minister of Electricity of Sagaing Region Government, U Than Nyunt Win, Director Dr. Soe Soe Ohn of the Department of Rural Development, investors/directors from Norfund, AC Energy and Yoma Strategic, as well as members of the local community.

“With changing energy markets, business models based on distributed energy generation will play an important role to provide access to modern electricity for all. As investors since the establishment of Yoma Micro Power, we are proud to support the pioneering rollout of such a business model,” said Pål Helgesen, Investment Director of Norfund. “With the solid team and partners in Yoma Micro Power, we are optimistic about further expansion of its activities, to the benefit of businesses and households in Myanmar.”

“We are delighted to partner with Yoma, who shares the same commitment as AC Energy to promote renewable energy and sustainability,” said Patrice Clausse, Chief Operating Officer of AC Energy International. “Together with Yoma, we aspire to be a leading contributor in the renewable energy sector of Myanmar and aid in its socio-economic development, bridging the country’s significant electrification gap through scalable and sustainable energy solutions.”

Yoma Micro Power is led by Alakesh Chetia, former President of SunEdison Social Innovations & Managing Director of Rural Electrification. Yoma Micro Power is a joint venture of Yoma Strategic Holdings Ltd., Norway’s development finance institution, Norfund, and the International Finance Corporation, IFC, a sister organisation to the World Bank. In April 2018, it was announced that Yoma Micro Power’s initial rollout would be funded with US$28 million by way of equity financing from Yoma Strategic, Norfund and IFC, and a blended concessional finance investment from the IFC-Canada Climate Change Program (“IFC-CCCP”).

In October 2019, Yoma Strategic announced that it would separately form a joint venture with AC Energy, Inc. (“AC Energy”), the energy platform of Philippine conglomerate Ayala Corporation. The joint venture will explore developing around 200MW of additional renewable energy projects within Myanmar, including expansion of Yoma Micro Power to more than 2,000 solar-hybrid power plants by 2023.

Listed on the Main Board of the Singapore Securities Exchange Trading Limited (SGX-ST), Yoma Strategic Holdings Ltd. is a leading business corporation with a diversified portfolio of businesses in Real Estate, Consumer, Automotive & Heavy Equipment, Financial Services and Investments in Myanmar. Together with its Yoma Group partners, Yoma Strategic is taking a conglomerate approach to build a diversified portfolio of businesses in Myanmar. The Company was ranked in the top 5% of the Governance and Transparency Index 2019, ranked 26th out of top 100 largest Singapore companies in the ASEAN Corporate Governance Scorecard 2017 and won the Best Managed Board (Gold) Award at the Singapore Corporate Awards in 2016.

Norfund is the Norwegian Investment Fund for developing countries. Our mission is to create jobs and to improve lives by investing in businesses that drive sustainable development. Norfund is owned and funded by the Norwegian Government and is the Government’s most important tool for strengthening the private sector in developing countries, and for reducing poverty. Norfund’s committed portfolio totals 3.1 billion USD in Sub-Saharan Africa, South-East Asia, and Central America. Norfund has four investment areas: Clean Energy, Financial Institutions, Scalable Enterprises and Green Infrastructure.

Alakesh Chetia is the founder of the company Micro Power that went on to become the joint venture company Yoma Micro Power with the partnership of Yoma Group, Norfund and IFC.

International Finance Corporation IFC—a sister organization of the World Bank and member of the World Bank Group—is the largest global development institution focused on the private sector in emerging markets. IFC works with more than 2,000 businesses worldwide, using capital, expertise, and active engagement to create markets and opportunities in the toughest areas of the world. In FY17, IFC delivered a record $19.3 billion in long-term financing for developing countries, leveraging the power of the private sector to help end poverty and boost shared prosperity.

Listed on the Main Board of the Singapore Securities Exchange Trading Limited (SGX-ST), Yoma Strategic Holdings Ltd. is a leading business corporation with a diversified portfolio of businesses in Real Estate, Consumer, Automotive & Heavy Equipment, Financial Services and Investments in Myanmar. Together with its partner, the SPA Group, the Group is taking a conglomerate approach to build a diversified portfolio of businesses in Myanmar. The Company was ranked in the top 5% of the Governance and Transparency Index 2017, ranked 26th out of top 100 largest Singapore companies in the ASEAN Corporate Governance Scorecard 2017 and won the Best Managed Board (Gold) Award at the Singapore Corporate Awards in 2016.

Appointed to the board of Yoma Group in July 2015, Melvyn Pun is an Executive Director and the Chief Executive Officer of the Yoma Group. Prior to that, Melvyn was the Alternate Director to Serge Pun of Yoma Strategic and the Chief Executive Officer of Serge Pun & Associates. He began his career with Goldman Sachs in Hong Kong SAR where he was Managing Director, Head of Asia Ex-Japan Corporate Solutions Group. Melvyn was educated in the United Kingdom and graduated from University of Cambridge in 2000 with a Bachelor of Arts (First Class Honours), Master of Engineering and Master of Arts.

Alakesh Chetia has 30 years of experience in solar energy, semiconductor, software and computer systems. Immediately prior to co-founding Yoma Micro Power, he was President of Social Innovations and Managing Director of Rural Electrification at SunEdison. Prior to SunEdison, Alakesh held positions of Vice President and General Manager at Cypress Semiconductor, Chief Operating Officer at TransEDA and Chief Executive Officer at iMODL, while based in Silicon Valley, California. Alakesh holds a Bachelor’s degree in Electrical and Electronics Engineering from NITK and a Master’s degree in Computer Engineering from Michigan Tech.

Pål Helgesen has 17 years of experience with energy investments in developing countries, including serving on boards of many companies. Formerly, he worked with strategy, acquisition, and business development at Det Norske Veritas, a technical risk management company with operations in more than 100 countries. Pål holds a Bachelor’s degree (honors) in Naval Architecture & Ocean Engineering and an MBA from IESE Business School.